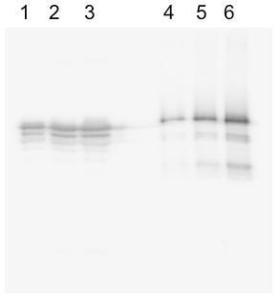 BSENR-184-100EA 334 EUR
BSENR-184-100
Anti-Microtubule-associated Protein Tau Rabbit Polyclonal Antibody
Vasta-aineet
FUNCTION: Promotes microtubule assembly and stability, and might be involved in the establishment and maintenance of neuronal polarity. The C-terminus binds axonal microtubules while the N-terminus binds neural plasma membrane components, suggesting that tau functions as a linker protein between both. Axonal polarity is predetermined by tau localization (in the neuronal cell) in the domain of the cell body defined by the centrosome. The short isoforms allow plasticity of the cytoskeleton whereas the longer isoforms may preferentially play a role in its stabilization. SUBCELLULAR LOCATION: Cytoplasm; cytosol. Cell membrane. Mostly found in the axons of neurons, in the cytosol and in association with plasma membrane components. ALTERNATIVE PRODUCTS: 8 named isoforms produced by alternative splicing. Additional isoforms seem to exist. Isoforms differ from each other by the presence or absence of up to 5 of the 15 exons. One of these optional exons contains the additional tau/MAP repeat. TISSUE SPECIFICITY: Expressed in neurons. Isoform PNS-tau is expressed in the peripheral nervous system while the others are expressed in the central nervous system. DEVELOPMENTAL STAGE: Four-repeat (type II) tau is expressed in an adult-specific manner and is not found in fetal brain, whereas three-repeat (type I) tau is found in both adult and fetal brain. DOMAIN: The tau/MAP repeat binds to tubulin. In Alzheimer disease, the neuronal cytoskeleton in the brain is progressively disrupted and replaced by tangles of paired helical filaments and straight filaments, mainly composed of hyperphosphorylated forms of Microtubule-associated protein Tau. Defects in Microtubule-associated protein Tau are a cause of frontotemporal dementia and parkinsonism linked to chromosome 17, as well as a number of other neurodegenerative diseases.

Specificity was demonstrated by western blot. 20ng recombinant Tau is easily detected with smaller fragments likely representing degradation products from the purified protein, which has been expressed in E. Coli.
Application Information:
WB and direct ELISA (Human). For WB a dilution of 1:500 is recommended. This antibody has been shown to detect the purified recombinant Tau expressed in E.Coli as well as a number of Tau isoforms in porcine cytosol. Biosensis recommends optimal dilutions/concentrations should be determined by the end user.