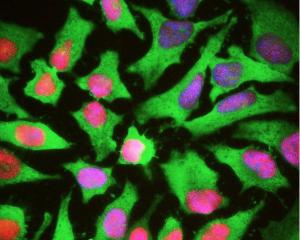 BSENC-1700-100EA 334 EUR
BSENC-1700-100
Anti-Heat Shock Protein 27 Chicken Polyclonal Antibody
Vasta-aineet
The heat shock proteins were discovered, as the name suggests, since they are heavily upregulated when cells are stressed by temperatures above the normal physiological range. They are expressed in unstressed cells also and have a normal function as chaperones, helping other proteins to fold correctly, and are required in much greater amounts if the cell or tissue is stressed by heat. The increased levels are generated transcriptionally under the influence of a powerful transcription factor, the heat shock factor 1 (HSF1). The different heat shock proteins were originally named based on their SDS-PAGE mobility, so HSP27 has an apparent molecular weight of 27kDa. It is an abundant protein even under non-stress conditions and frequently shows up as a major spot on 2 dimensional gels of cells or tissues. It is known to associate with a variety of other proteins such as actin, intermediate filament subunits and ubiquitin and is found both in the cytoplasm and the nucleus of cells. HSP27 can become heavily phosphorylated under the influence of multiple protein kinases particularly as a result of activation of the p38/SAPK pathway. Upregulation of this protein is protective against neurodegenerative diseases at least in certain mouse models (1). Point mutations in the HSP27 gene are associated with two neurological diseases, Charcot-Marie-Tooth disease type 2F and distal hereditary motor neuropathy IIB (2). These diseases are associated with axonal loss apparently following defects in the transport of neurofilaments.

The antibody reacts with a 27 kDa band by Western blot on a crude extract from HeLa cells. It has also been used successfully for immunocytochemistry.
Application Information:
Western Blotting (WB) and Immunocytochemistry (ICC). A dilution of 1:2,000 - 1:5,000 is recommended for WB. A dilution of 1:1,000 - 1:2,000 is recommended for ICC. Biosensis recommends optimal dilutions/concentrations should be determined by the end user.