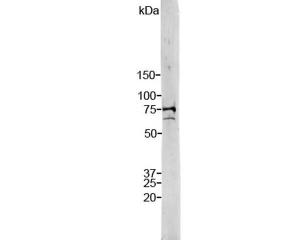 BSENR-1697-100EA 334 EUR
BSENR-1697-100
Anti-Lamin A/C, whole molecule Rabbit Polyclonal Antibody
Vasta-aineet
The Lamin proteins are members of the intermediate filament protein family but are located inside the nucleus rather than in the cytoplasm (1). The lamins function as skeletal components tightly associated with the inner nuclear membrane. Originally the proteins of the nuclear cytoskeleton were named Lamin A, B and C, from top to bottom as visualized on SDS-PAGE gels. Subsequently it was found that Lamins A and C were coded for by a single gene (2), while the Lamin B band may contain two proteins encoded by two genes now called Lamin B1 and Lamin B2. Lamin A has a mass of about 74kDa while Lamin C is 65kDa. The Lamin A protein includes 98 amino acids missing from Lamin C, while Lamin C has a C-terminal 6 amino acid peptide not present in Lamin A. Apart from these regions Lamin A and C are identical so that antibodies raised against either protein are likely to cross react with the other, as is the case with this monoclonal. Lamin polymerization and depolymerization is regulated by phosphorylation by cyclin dependent protein kinase 1 (CDK1), the key component of "maturation promoting factor", the central regulator of cell division. Activity of this kinase increases during cell division and is responsible for the breakdown of the nuclear lamina. Mutations in the LMNA gene are associated with several serious human diseases, including Emery-Dreifuss muscular dystrophy, familial partial lipodystrophy, limb girdle muscular dystrophy, dilated cardiomyopathy, Charcot-Marie-Tooth disease type 2B1, and Hutchinson-Gilford progeria syndrome. This family of diseases belong to a larger group which are often referred to as Laminopathies, though some laminopathies are associated in defects in Lamin B1, B2 or one or other of the numerous nuclear lamina binding proteins. A truncated version of lamin A, commonly known as progerin, causes Hutchinson-Gilford progeria syndrome, a form of premature aging (3).

Lamin A and Lamin C. The antibody reacts with a 74kDa and 65kDa band by Western blot on HeLa cell extract. It has also been used successfully for immunocytochemistry on HeLa cell cultures.
Application Information:
Immunocytochemistry (ICC) and Western Blotting (WB). A dilution of 1:1,000-1:5,000 is recommended for WB. A dilution of 1:1,000-1:5,000 is recommended for ICC. The optimal dilution should be determined by the end user.