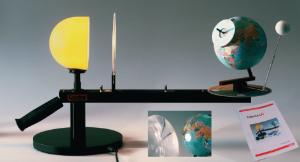 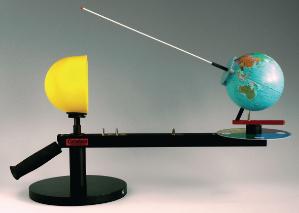 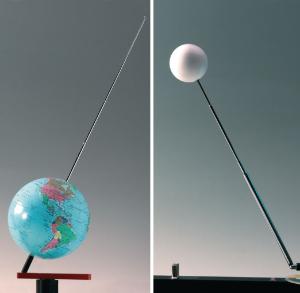 765-0111EA 0 EUR
765-0111
Tellurium
Opetusmateriaalit Earth Science Educational Materials Astronomy Learning Activities
Fresnel lens, Movable in three positions provides a parallel directed light that results in an entire half of the earth being illuminated and shadow lines (day and night) correspond to nature. Has never before been possible with previous constructions. Day, night and seasons. The entire globe is illuminated and shadow lines appear clearly.

Tropic: The lens focuses a small point of light on the center of the globe. The point of light follows the equator between the northern and southern tropics as the earth rotates. Moon phase: In this position the moon is specially illuminated. When the moon is rotated around the earth, the lunar phase and solar eclipse can be clearly demonstrated. Globe with telescopic rod: Shadow lines and other details are clearly visible on the large globe (15 cm diam) in the distance. Using the telescopic rod (33 cm), the position of the earth's axis and the position of the pole star can be convincingly demonstrated.

The moon on a telescopic pole: The moon is rotated by hand around the earth and can be adjusted in height and sideways. Horizon board with shadow figure: Can be applied to any place on earth. Changed situations of lighting on earth can be easily and comprehensibly explained with the shadow figure.

Satellite rod: Mounted on the horizon disk and demonstrates a satellite orbit. Date plate and date viewer. The globe is mounted on a date pointer that moves around a date dial when the tellurium arm rotates toward or away from the sun (seasons). Dates for summer and winter solstice are well marked on the date plate. Manual with detailed description of 13 areas